A diving safari on the Red Sea – Daedalus and Elphistone

Another diving adventure at the most beautiful sites on the Red Sea!

The more remote Daedalus Reef has been added this time to the proven and popular Elphistone location. The lower number of visitors in recent years has encouraged the return of large sea predators such as hammerhead sharks and devilfish. On the spring 2016 trip hammerheads and reef sharks were visible at Daedalous on every dive!

We trust that we’ll fill the boat again and that we’ll once more be in complete control of planning all of our activities during the diving safari. We will choose our own course and decide how long we wish to stay at a particular location. We will also decide whether we will visit a wreck along the way (e.g. Salem), or whether we will stick to coral reefs.

The underwater park with the Arabic name of Abu Kizan ranks along with Zabargad Island as one of the most remote locations in the Red Sea.

The isolated reef with an oval shape and a width of up to 500 m is situated nearly in the middle of the Red Sea between Egypt and Saudi Arabia. It is located 150 km from the port of Marsa Galeb. The lighthouse built by the British in the 19th century continues to be manned by a four-member crew to warn ships of the danger. Arrangements can be made with the captain to dock at the end of the nearly 100 m wooden pier at the edge of the reef to enjoy the stunning views from the lighthouse.

Diving boats anchor on the south side to protect them from the waves from the north.

Daedalus is known for the occurrence of numerous schools of fish, including snappers, yellow tangs, jacks and others. The reef is richly covered with soft and hard coral and with large gorgonian fans. On the west side is a small terrace with sea anemones, on the south side a plateau at a depth of 30-40 metres. The other sides of the reef are virtually sheer, falling to depths of around 500 metres. It is precisely this environment with few human visitors and frequent currents that is favoured by numerous species of pelagic fish on their journey over the high seas. The best site for diving is on the north side of the reef, which is covered today by an overgrown pipeline, apparently the remains of the cargo from at least one of the sunken ships. In addition to schools of barracuda, tuna and Napoleon wrasse, you can also encounter grey reef, whitetip and hammerhead sharks and threshers. With a little luck, you will also catch sight of beautiful large dolphins and devilfish. 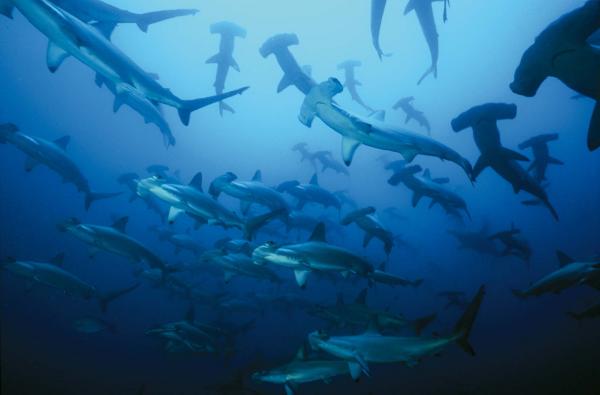 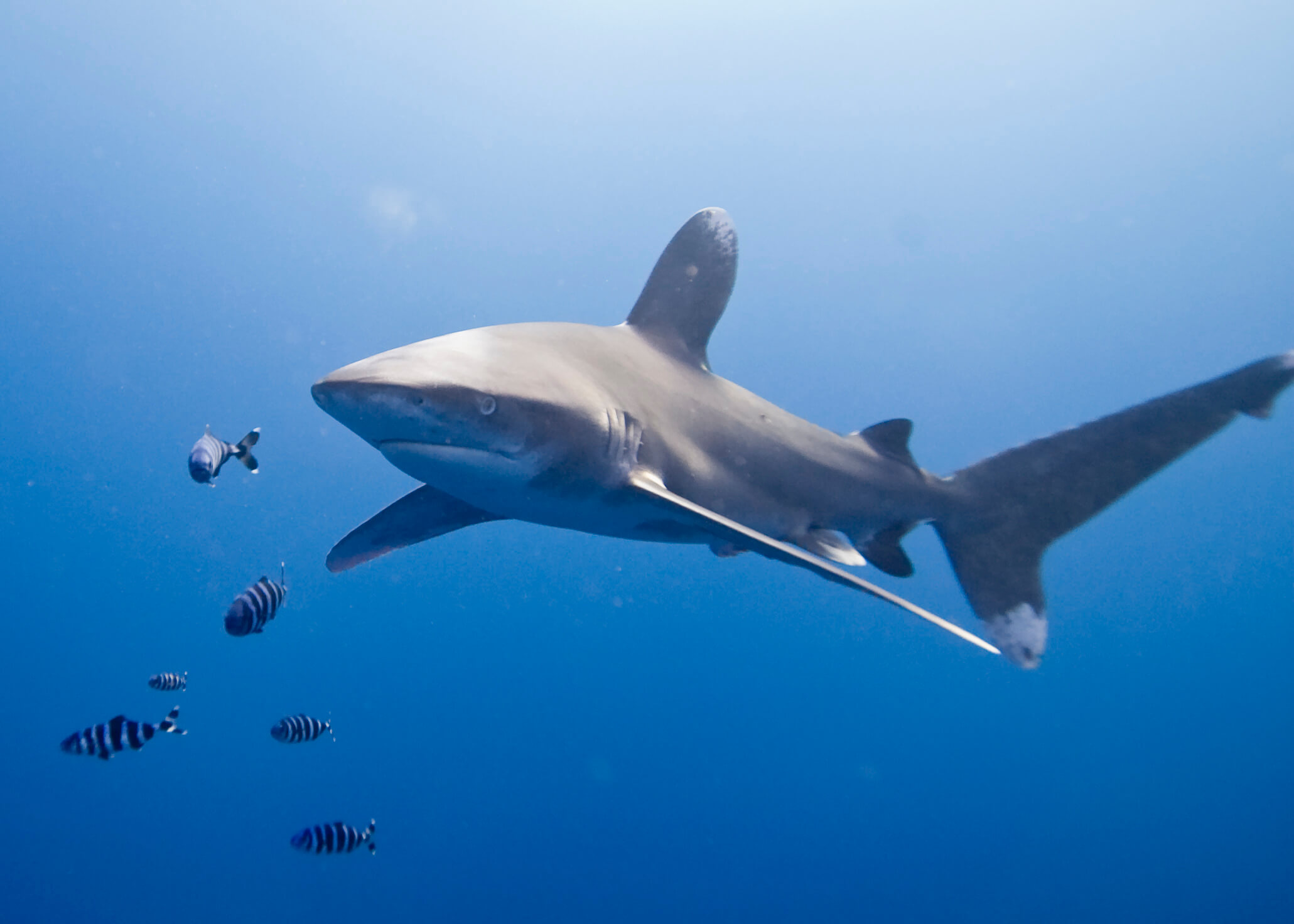 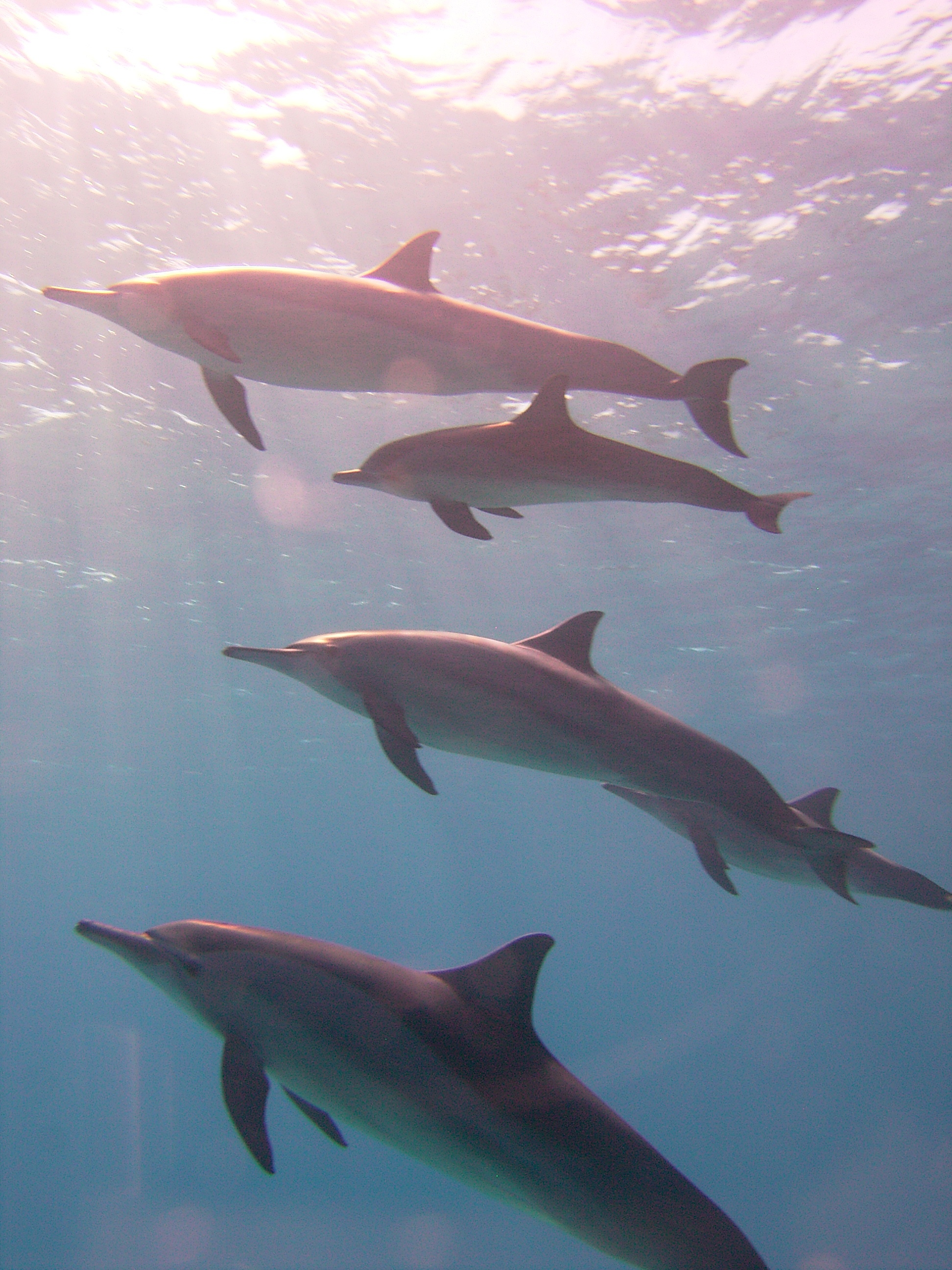 After landing in Hurghada or Marsa Alam, we travel south to the port of Marsa Galeb (or another port depending on the location of the boat). After getting settled on board and a meal, there is a briefing session followed by the assembly and testing of gear.

After breakfast and the necessary police clearance, we sail to the first dive site – Mu Barak. The coral wall gradually drops to a depth of about 10-15 metres. After lunch, we move to one of the Abu Dabab reefs, where we take afternoon and night dives. In the evening following dinner we typically sail to Daedalus; if the weather conditions are favourable, we will reach our destination in the early morning.

Before breakfast, and again depending on the weather, we usually dive on the north side of the Deadalus reef, where you have the best chance to encounter tuna, barracuda, dolphins and various types of sharks, including hammerheads. We usually repeat the dive after breakfast. The afternoon dive is a current dive on the west side, where you can see hawksbill sea turtles. As at the Brothers Islands site, night dives are not permitted due to frequent heavy currents.

We usually make two morning dives on Deadelus Reef and after lunch shift to some of the Abu Dabab reefs, where we dive at night.

Three dives at beautiful Elphistone Reef. The morning dive is on the north plateau to a depth of 30 metres, continuing along the walls on the east side. The afternoon dive begins on the opposite side, i.e. on the south plateau covered with beautiful soft coral and sea anemones and ends on the west wall gradually falling to a depth of 70 metres. The final dive in the current is on the west side.

Three daytime dives and one night dive are made on Abu Dabab reef nos. 2 and 3. The two sites are similar in size, depth and terrain. The maximum depth is 20 metres.

The last two dives: in the morning at Abu Dabab–Bar where, on the sandy bottom covered with seaweed, at a depth of 5-15 metres, you will see green sea turtles, guitarfish and, with a little luck, the rare dugong. The final site is Shaab Shena, where, on the reef gradually dropping to 15 metres and located only minutes from the Marsa Galeb port, you can see fish species common to the Red Sea and even encounter dugongs.

After the final lunch on board, we leave for the hotel in Hurghada, where we have dinner, spend the night, and have breakfast.

Morning transport to the airport and arrival in Prague.

Unlimited diving (tank fills) – on islands max. of 3 dives per day due to ban of night diving (only until 5 p.m.)

Transfers from Hurghada to boat and back 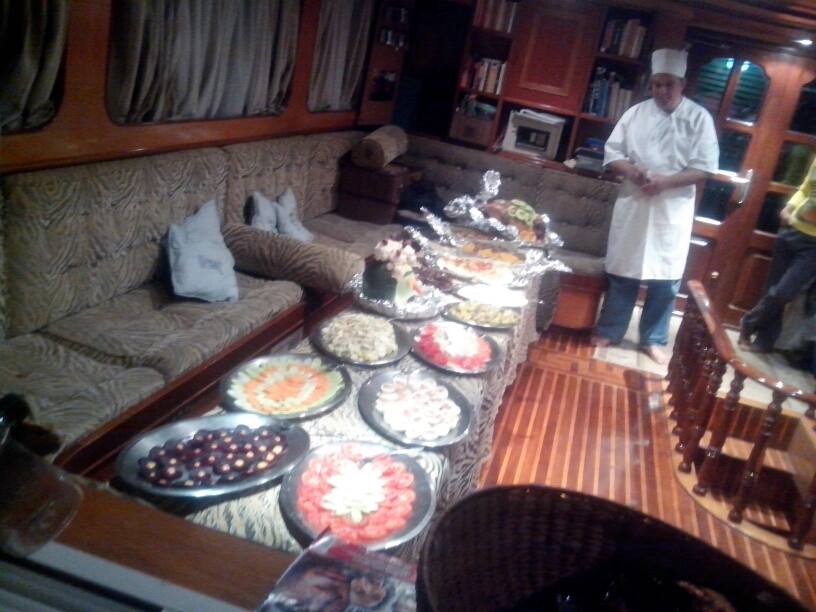 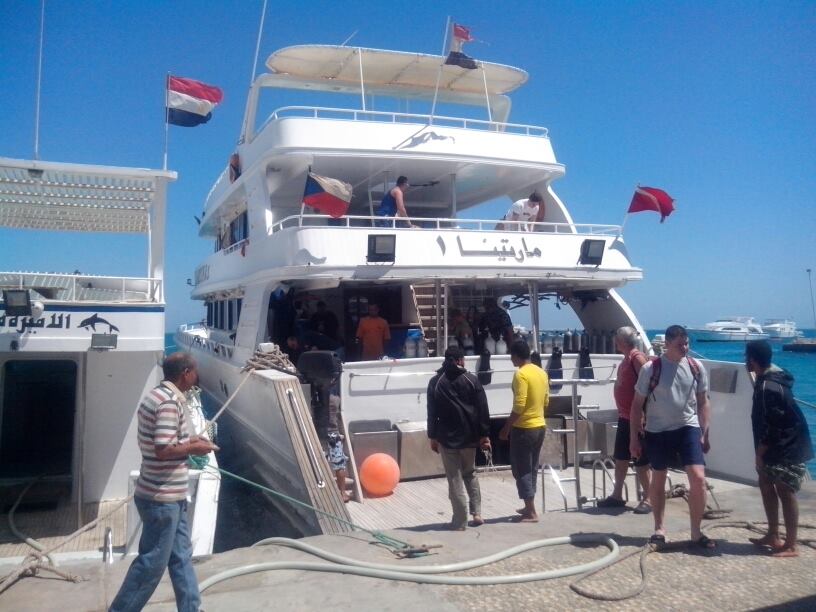 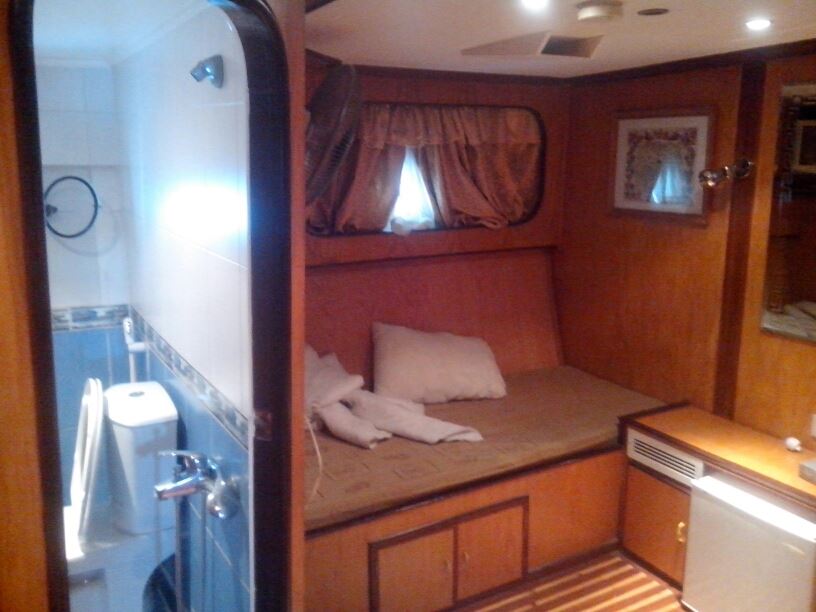 Price does not include:

Insurance – travel and diving, and individual insurance against trip cancellation

Last night in four-star hotel (all inclusive) in Hurghada – c. EUR 30, if the boat is expecting another trip; otherwise we remain on the boat.

We sail on a comfortable safari boat with three decks. The quality, interior design and furnishings of cabins with private bathrooms, air-conditioning and refrigerator rank it among luxury boats on the Red Sea. In the case of any technical problems, the replacement boat will be in the same class. The boat is furnished with the required safety and first aid equipment.

Photos of previous safaris are available at Red Sea safari

A professional crew and diving instructor will tend to your comfort and safety. 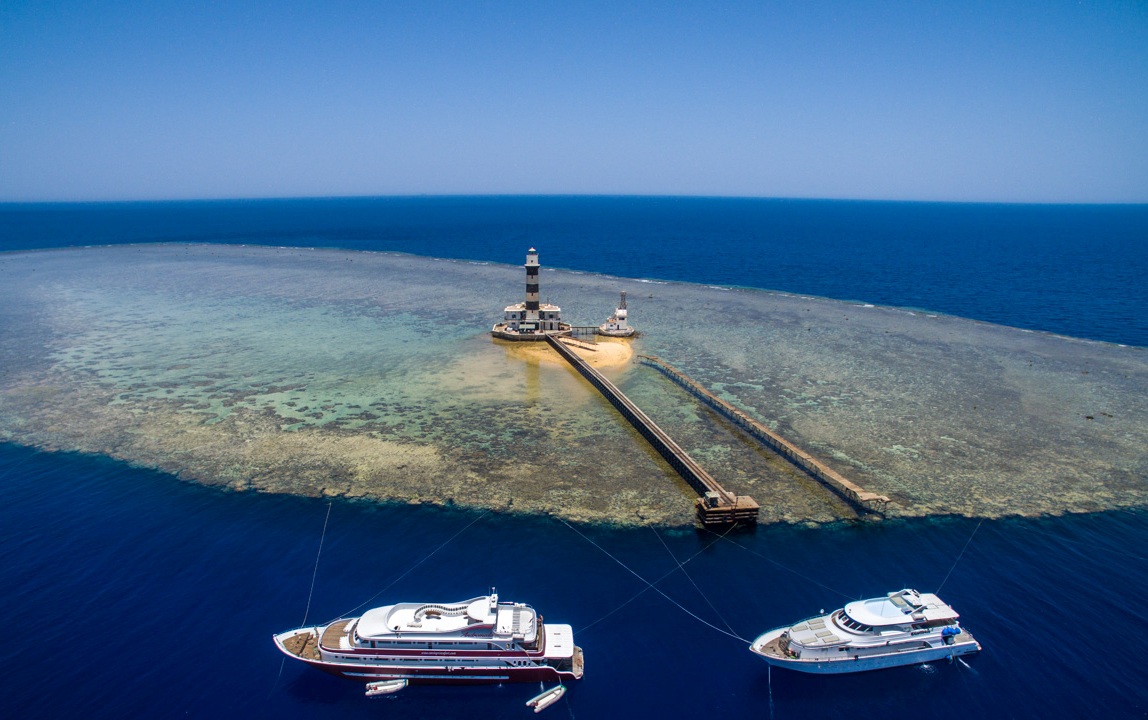